Corporate leaders generally view the emergence of disruptive technologies with dread. After all, disruption has led to the downfall of many a great company ranging from Kodak to Nokia, and even the most sophisticated companies struggle to respond to disruption. For those that have survived industry disruption, such as IBM and Intel, the experience has been a crucible. However, there is less discussion about another type of crucible, namely the one caused by the absence of disruptive change. In many ways it is as challenging, if slower to manifest, as the threat of disruption itself.

So what happens to companies and industries that suffer from too little, rather than too much, disruption? 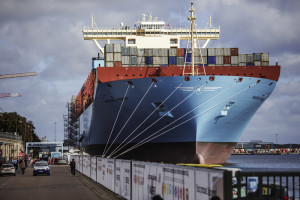 Consider two major trends in the container shipping business. One is the growing size of container ships. The largest ones now carry   19,000 twenty foot containers (TEUs, in industry parlance), and ships with a carrying capacity of 24,000 containers are on the drawing boards. These vessels are becoming so large that some don’t fit through the Panama Canal. Harbors are struggling to resolve the congestion crisis that arises when ships are off-loading ten thousand or more containers onto one pier.

The challenges associated with operating such huge vessels at sea and in constrained harbors are obvious. Just last month, in the Suez, two massive container ships collided, a slow-motion accident caught on video.

But the other trend is the continuing wave of M&A activity as companies seek to increase not only the scale of their vessels but also the reach of their networks.

It’s all part of the relentless drive to reduce the cost of ocean-going freight that has made transportation very cheap indeed. In a private conversation, a shipping executive noted that the cost to ship a pair of sneakers from Vietnam to Europe is two cents. Another executive noted that the container shipping business is a near perfect market with highly standardized products (the ships, the containers, the routes). “It’s an impossible business,” he concluded. Rather ominously, another executive observed that it’s also an impossible business to exit.

The consequences involve being caught in dire straits: commoditization, overcapacity, low margins, and very slow growth. Many ships are now operating at half speed just to save fuel and alleviate the fact that there are too many for the market.

Yet naval engineers are planning and building ever bigger ships for the very reason that there’s been no fundamental disruption in the container shipping business itself. As the ships grow, their engines have become vastly more efficient and sophisticated, the fuel mix has changed, and complex IT infrastructure has been put in place to coordinate the movement of the containers and ships.

But fundamentally the underlying cost structure of the business has not changed from 1950 when the first container ships carried a mere 500 to 800 containers across the world.

The basis of competition in the industry continues to be the efficiency of moving a metal box from harbor to harbor, and the technology used to move that metal box has been characterized by sustaining innovation over the past fifty years.

Disruptions on the horizon?

Still, we need to ask: are there any technologies or business models that could disrupt the container shipping business?

There are at least two technologies on the horizon. One is the advances in robotics that could reduce the global wage arbitrage and move some manufacturing closer to the end consumer—from Asia to America, for instance. Likewise,3D printing could have a similar impact if it becomes vastly more sophisticated and accessible. If manufacturing moves closer to the end user, the need to ship goods halfway around the world would be reduced.

However, it seems that these technologies are still far from causing meaningful disruption. Before shipping executives worry too much about the challenges of disruptive technology, they need to remember that a sector that is not immediately threatened by disruption is caught in a relentless quest for scale and efficiency. To shrink from these imperatives would mean to effectively exit the industry and to confront the difficult task of auctioning off some very large ships (that were not quite large enough).

Yet it takes much greater creative thinking to escape the grasp of such a static basis of competition. To do so, it helps to realize that the technologies that cause disruption are often initially in the realm of science fiction (for example holograms and advanced robots) and thus difficult to take seriously at first. After all, who would have thought 20 years ago that we would do so much of our shopping online and fighting so many of our wars with drones?

Pontus Siren is a partner with Innosight based in Singapore.