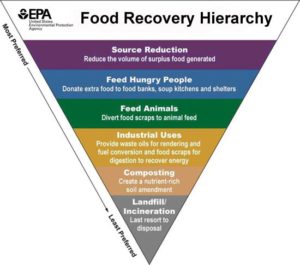 The country of France recently passed a law outlawing supermarkets from destroying or throwing away unsold food. By specifying steep fines for failing to donate discarded food to charities, France is reacting to an out-of-control problem in wealthy countries: roughly a third of all produced food ends up in the trash-an environmental catastrophe that persists even as millions of people go hungry or undernourished every day.

A better approach than a blanket law, however, is a framework of incentives that encourage experiments and entrepreneurship. Instead of viewing food waste as a crime, why not look at it as a market? In this case, it’s a matter of sparking enough demand to meet supply.

After all, there is plenty of wasted food out there–a staggering 133 billion pounds annually in the U.S. alone. That is more than a pound of wasted food a day per person, and nearly $900 a year in wasted food per household . Food waste is now the major component in landfills. The question is: what can we do with it?

At Disney World in Orlando, a different approach to food waste is going on behind the scenes. For decades, Disney has tolerated the problem of leftovers being tossed by the ton into garbage bins by restaurant workers and park goers.

But in 2014, the Magic Kingdom signed on to be the first customer for an “anaerobic digestion” plant built by Waltham, Mass. company Harvest Power. As food breaks down, anaerobic digestion captures the biogas that’s naturally emitted and converts it to energy. The facility near the theme park processes 100 tons of wasted food from Disney a day and each month produces enough electricity to power 36,000 homes in Florida. Leftover residue from the process is made into fertilizer sold to area farms.

This Cinderella transformation of discarded food is just one example of how marketplace experiments can help spur new growth markets. Venture capitalists are believers: Harvest Power has raised more than $350 million, making it one of the best-funded startups in New England.

The pilot project in Orlando is moving ahead just as a U.S. policy framework is starting to take hold. In September of 2015, the USDA and EPA announced the first national goal for reducing food waste. The target: cut America’s food waste in half by 2030. Following those guidelines, three New England states and three major cities have already set restrictions on food waste, some placing limits and some banning food waste in landfills entirely. For example, Massachusetts limits food business such as restaurant chains and supermarkets to one ton of landfill waste per week.

Because food is an organic compound and readily biodegradable, one might assume that all this waste is not a major problem. However, consider this. Food takes resources to produce-water, land, fertilizer, energy. It’s heavy and expensive to transport. As food lies in a landfill, it decomposes and emits methane – a gas 25 times worse for climate change than carbon dioxide. Lastly and certainly not least, there is a high social cost. Amidst the waste, 17.4 million U.S. households struggle to have an adequate amount of nutritious food.

Moving from stick to carrot

Food waste policy is hardly the only market to harness public policy for innovation and growth. In the last four years, federal and state incentive programs have propelled the U.S. solar energy to record installations. Accountable Care Organizations have proliferated in the wake of the Affordable Care Act to slow the rise of healthcare costs.

The challenge is to look past regulation as a stick to force compliance and instead identify the carrot of opportunity that is often hidden in the regulations. For Harvest Power, success is coming by taking advantage of a regulatory environment that incentivizes food waste recycling and breaks the “chicken and egg” gridlock.

Harvest Power is just one of dozens of companies and nonprofits operating today to reduce, reuse, and recycle food waste-and in the process creating growth and profit. All told, six billion pounds of food a year never even gets a chance to be purchased. That’s the total weight of “ugly” fruits and vegetables thrown away every year because of aesthetics.

Other startups working with large enterprises include Fruitcycle and Misfit Juicery. These Washington DC-based ventures have created products such as dried fruit snacks and smoothies made from ugly fruit. Others, like Hungry Harvest and Farm to Family, specialize in picking up imperfect produce from farms and delivering it for free or at a discount to people in need. There is even #uglyfruit and #imperfection hashtags now on Instagram as part of the rebranding effort.

On the consumer end, technology solutions are enabling an online marketplace, making an excellent medium for uniting those with unwanted food to those who need it. Spoiler Alert, Food Cowboy, and Foodloop are three such companies whose app platforms are enabling B2B and B2C transfers of unwanted food.

Also addressing the conundrum of surplus food is Doug Rauch, the former president of Trader Joe’s. His startup Daily Table is a nonprofit grocery store that sells surplus food donated from wholesalers and major supermarket chains. Along with providing low cost food, the store also prepares and sells fresh meals on site. Launched last summer in Boston, he has hopes to scale to other cities around the country.

Others are following Disney’s example and taking food waste recycling into their own hands, which is spawning the creation of new food waste ecosystems that are also new growth markets.

The supermarket chain Stop&Shop opened its first on-site anaerobic digester at a distribution center in Freetown, Mass. The company plans to produce its own energy by using food not suitable for sale or donation. Biogas is not the only product recycled from food waste. Harvest Power also sells compost, mulch, and fertilizer. Other companies, like Ecoscraps, focuses only on the landscape products, selling all-organic compost, soil, fertilizer, and other gardening products made exclusively from food waste.

Principles for pivoting from stick to carrot

By looking closely at how new growth emerges from these kinds of untapped market needs, we can distill five principles for how to evaluate opportunities in new markets and new regulations:

This method of pivoting from stick to carrot enables you to perceive how new opportunities and regulations could lead to new capabilities, products, or business models. The food waste case shows that growth can come from unexpected places. Organizations that identify the right opportunities are the ones that can tap into an unexpected source of new growth.

Sarah Nielsen is an associate at Innosight.