When facing stiff competition, the decision of how to proceed almost always comes down to some variation of the same question: fight or flight?

Wal-Mart, Target, Barnes & Noble, Home Depot and the other big box stores were the toughest guys on the block for 30 years. Yet, in 2013, with the continuing maturation of e-commerce, the former retail heavy weights are crumpling under the pressure of falling same store sales, shrinking growth and increasing customer attrition. With financial impact now growing too large to be ignored, the big box giants have come to the familiar competitive crossroads: should they fight or should they run?

The stakes could not be higher and getting it right will mean the difference between survival and bankruptcy. A deep understanding of disruptive theory suggests that the answer isn’t that easy. For the first time in retail disruption history, both fight and flight mean near certain short-term disruption. Welcome to the big box dilemma.

The vexing nature of this current iteration of retail disruption is best understood in its historical context.  Each time an entrant has upended incumbents in retail markets, the disruption has exhibited strikingly similar patterns: 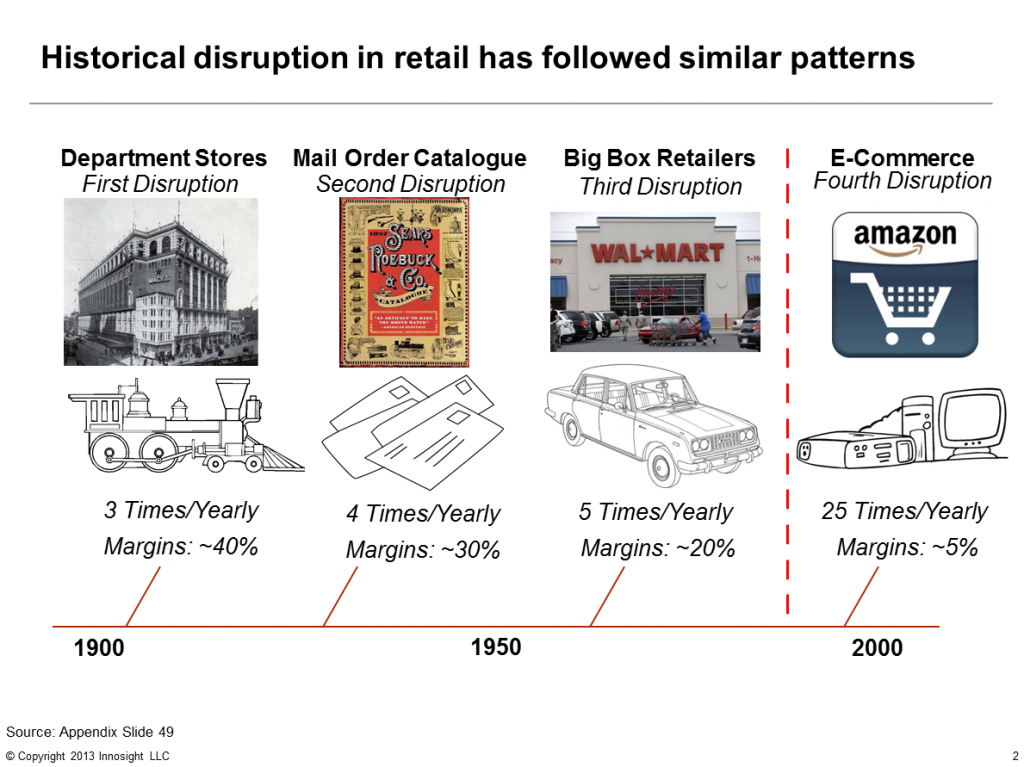 Technological Catalyst: Every disruption in retail over the past 100 years has been triggered by a technological catalyst. The train, the US mail system, the car and the internet all triggered a seismic shift in retail that launched disruptors into the market.

A New Business Model: The technological catalysts above each gave way to a new business model, pioneered by visionaries like Rowland Macy, Richard Sears, Sam Walton and Jeff Bezos, that fundamentally changed the retail landscape.

Low Margin/High Turn: The new models that emerged were each disruptive, in part, because they allowed entrants to turn their inventory faster than incumbents and therefore achieve the same profitability by charging much lower margins. In the late 19th century, railroads enabled the rise of department stores, where inventory turned over approximately 3 times annually. In the age of e-commerce, turn rates have soared to 25 times per year (see chart).

Hard Goods to Soft Goods: The final disruptive pattern is that disruptors have always entered at the low-end of the market with lower margin, basic goods like books, records, pots and pans, utensils etc. As they gain traction with the new model, however, disruptive tendencies kick-in and they slowly begin moving into higher margin, more experiential goods like cosmetics, clothing and furniture. The business model is the same, but the store changes from merely a delivery mechanism for basic goods to a destination based on experiencing and discovering higher-margin products.

Why the Current Disruption is Different

In the beginning of the e-commerce disruption, all went as expected. The commercialization of the internet in 1995 gave way to a new business model pioneered by the likes of Amazon that turned goods five times faster than big box retailers and could, therefore, charge much lower margins. E-commerce initially entered with books, records and DVD’s; classic basic, low-margin goods. But then, almost overnight, something unexpected happened; high-margin goods that historically required experiencing, like clothing, furniture, appliances, tools and complicated electronics began selling online as well.

How could it be that high-margin, experience-centric goods could be sold through an experience-free sales channel? Do people no longer care to see furniture before buying? Is trying on clothing no longer a prerequisite to purchasing it? Are expensive, complicated electronics more easily understood by today’s consumers? The answer to all of those questions is no. While there are certainly exceptions, most people still want to see, touch and feel these goods before purchasing them.

The answer to the disruptive anomaly above becomes quickly evident in an afternoon at any big box retailer. Dozens of consumers rush in to stores, touch, feel and experience products and then leave empty-handed. They are engaging in the incredibly disruptive practice of “showrooming”; using brick and mortar stores to experience high-end goods before going online to purchase them.

The dilemma created by this dual disruption is clear:

The growth of conventional low-end disruption makes fighting a lower-cost business model over basic, low-margin goods a losing battle. Recognizing that reality, Wal-mart, Target and the rest have begun divesting of their book, CD and DVD product lines. They have chosen not to fight.

With no chance to fight and nowhere to flee, incumbents are stuck in the big box dilemma.

While the situation for many of the world’s big box giants is dire, it is not hopeless. For many stores in rural markets the disruption is still in nascent stages. For stores in highly disrupted urban markets, however, the solution will require more than just shifting the product focus of their existing business model or making stores more exciting and inviting; it will require fundamental business model innovation.

The current big box model captures value when people purchase goods. But now, in order to survive, big box retailers need a business model innovation that fundamentally changes the way they capture value. Since they are no longer the cheapest, and increasingly no longer the most convenient, they must integrate around the jobs they can win. The objective is to capture value at every turn. At the crossroads of fight or flight, they must reject both. Instead, they must transform. But how?

These are example of possible ways that big box retailers can deliver and capture value by solving critical “jobs-to-be-done” of consumers. New business models could include the following prototype examples:

Wal-Mart Wellness Centers: Shift the big box from primarily product centric to service centric. The Wal-Mart Wellness Center transforms part of a store into a center for all your health care needs. The Wal-Mart gym, rock climbing wall, yoga room and nutritionist occupy one side of the building. The other side is home to professional services like dental, medical and optometry offerings. “Save money on services” is the new mantra.

Home Depot Hands-On Membership: Split the conventional Home Depot into an experience center and a pick up center. The experience side is the most hands on product purchasing experience you have ever engaged in. You can test all products before buying and bring in your work in process to get an expert opinion. Employee expertise is provided to help you plan, purchase and carry out each step of your project.  A yearly membership grants you unlimited access. The pick-up side provides little by way of displaying products and is simply a fulfillment center for online or in store orders.

Barnes and Nobles Afternoon Book Club: A day care gives a break for stay at home moms as they join together to read and discuss classic books in a “Members Only” book club corner of the store. Famous authors Skype in to book clubs around the world to discuss the story and answer questions.

Target Street Cart: Introduce the Target street cart in major metropolitan areas to carry everything people need “last minute” with a product mix that changes depending on the season, day, and time. Taking convenience to a whole new level and shave the costs off of in-store leases.

Kmart “Pinterest” Showroom: A partnership with Pinterest that carries an extremely fast paced inventory turnover driven by weekly analytics of what is trending on social media and what products are the most well liked. The entrance fee is justified by the highly discovery-oriented staff and product lay-out.

Some of these models may not be workable, but retailers need to do some radical experimentation. The disruption clock is ticking, and time is of the essence.

Ryan Beck was a 2013 summer associate at Innosight who is studying business management at Brigham Young University.