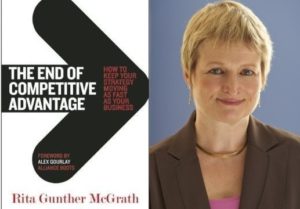 In her new book, “The End of Competitive Advantage,” Columbia Business School professor and Innosight Fellow Rita Gunther McGrath argues that companies need to shift their strategy from long-term to transient edges in the marketplace.

Innosight recently had a chance to catch up with her to talk about some of her research and the implications for strategy, innovation, and leadership.

You argue that competitive advantage is dying and that companies need to embrace the idea of transient advantage. What do you mean by that?

The Holy Grail of strategy for many years has been defined as sustainable competitive advantage: you find an opportunity, you throw up entry barriers like crazy and then you get to enjoy it for a long period of time. But increasingly, this no longer works well or even makes sense, thanks to globalization, digital disruptions, and so on. So in response to this shift, organizations need to build up temporary or transient advantages where they seize opportunities, exploit them, and then move on quickly when they’ve exhausted the opportunity. To do this effectively, we need to think differently about strategy.

You write that industries, as traditionally defined, are becoming less relevant and that companies need to think about competing in “arenas” instead. What does this mean for strategy?

But that is a dangerous way to think about competition. Boundaries between industries are no longer so clear-cut. Think about TV and telecommunications and computers. It’s much harder to say where one begins and other ends. So as a result, industries are now competing with other industries. That creates a new dynamic for strategy development: using industry as a level of analysis will not provide the kind of fine-grained insights you need to make smart decisions.

A better unit of analysis is what I call arena: this transcends industry to reflect the connection between market segment, offer, and geography. So rather than competing for industry leadership, companies need to look at the pot of resources they want to capture—for example, consumer household spending. What are you going to do to capture that opportunity, and then what kind of space is it? Is it a virtual space, a real space, a physical space? And so, what you’re essentially doing is stringing together a whole ring of these arenas that eventually become how you orchestrate your strategy. To oversimplify a bit, traditional strategy is like the game of chess, where the goal is to achieve a competitive advantage in a major market—akin to checkmate. Arena-based strategy is more like the Japanese game Go, in which the goal is to capture as much territory as possible.

What are the implications for innovation strategy?

One result of this shift to transient advantage is that is that innovation becomes more imperative, which means that organizations really do need to make it a routine capability, rather than pursue it in fits and starts. So you need a governance structure. You need a well-thought-out process for getting new ideas into the market quickly. You need a way of making sure that the funds are there in the right way. You need to create the right the incentives. Innosight has spotlighted this in its Growth Factory work.

Purchase the book on Amazon

You caution executives not to get trapped by competitive advantage. What do you mean by that?

What happens when a company has been very successful for a long time is that people don’t feel the urgency to innovate.There’s a tendency to continue to invest along the trajectory that’s already been invested in.And it’s very, very difficult to retool because anything new and uncertain becomes the classic innovator’s dilemma situation.

Probably the most vivid example at the moment is Research In Motion. The company is just trying to shore up its advantage by throwing millions of dollars at trying to get back in the game.And you really have to ask just the question: would they be better off taking that money and doing something else with it rather than trying to recapture dated glory?

There are implications for leadership. You say, for example, that company executives need to move from a mindset of seeking confirmation to seeking dis-confirmation. Can you explain what you mean by that?

Business leaders love to say, “I don’t want any surprises” and “don’t bring me a problem without having a solution for it.” This makes sense to a certain extent when you’re managing the core business; there you want to make sure you are optimizing and not making stupid mistakes.

But the problem with this leadership style is that you’re going to get “no surprises” until it’s too late.And you’re not going to have people bringing you things that they’re really worried about because they don’t know how to solve them.

This is particularly dangerous when you’re creating a new growth business, because you need unfiltered information and data to make smart decisions.

Most of us know about confirmation bias, where people, usually unconsciously, seek out information that confirms what they believe to be true. There’s an organizational analogue, and that is to see confirmatory evidence that “all is well.” In this new era, companies have to actively fight against this and deliberately seek information that challenges assumptions. And leaders need to create a culture that encourages people to seek out and share evidence that things are changing, that there may be trouble ahead—even when things seem to be going well. As Alan Mulally, the CEO of Ford, says, “You can’t manage a secret.”

Cathy Olofson is the chief marketing officer at Innosight.