The shale gas revolution has unleashed an abundance of low-cost energy. In what would have been unimaginable just a decade ago, the United States is now projected to become a net exporter of fossil fuels, a sea change driven by the discovery of natural gas fields across the United States and the development of innovative drilling technologies. While conventional natural gas is surpassing coal as the nation’s primary source of electricity generation, it is also a potential usurper to Big Oil’s dominance in transportation fuels, with more than 12 million CNG vehicles now on the road worldwide. 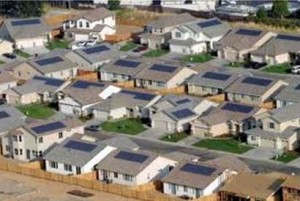 Yet natural gas is, at best, an intermediate solution for the uncertain future of our energy system. It is a fossil fuel, a non-renewable resource and, despite the assurances of the gas industry, it relies on a complex, costly, and potentially unstable value chain.

In the long run, renewable energy will come to power every aspect of our lives. The only question is what the time frame will be: 5 years, or more like, 10, 20, 50 or 100 years? How long will natural gas stand at the pinnacle of our energy system, and when will the wholesale shift to renewables take place? The answer has major strategic implications for energy firms and ultimately will impact all companies and consumers, as we all rely on energy for our subsistence.

Rather suddenly, the time horizon for renewables is appearing much closer than ever. For the first time, solar is reaching “grid parity” with natural gas, meaning the cost to generate equivalent units of energy are the same in at least some markets, most notably in California. The price of one watt of crystalline solar cells has gone from $77 in the mid-1970s to $0.70 today. Furthermore, natural gas has recurring costs that solar does not—as it requires constant drilling, production, transportation, and eventually delivery to the consumer. By contrast, solar costs generally end with the installation of panels. And the cost of building solar technology decreases to unprecedented low levels, the equation only grows more attractive. As a result, electric utilities in California are viewing solar as a technology that is a disruptive threat to its business.

Indeed, renewable energy is prototypically disruptive: the products are not as good (they don’t work at night unless a storage solution is in place) and they have the potential to expand access to new consumers, such as in poor, rural areas of the world. Since solar lacks the streamlined infrastructure and reliability of incumbent offerings, it is often ignored by the major energy players.

The assertion that renewable energy, and solar in particular, is a disruptive technology is not new. In the first edition of his seminal work, The Innovator’s Dilemma, Innosight co-founded Clay Christensen evaluates electric vehicles as a disruptive technology. In a paradox not dissimilar to that of electric vehicles, renewables have still yet to capture a significant market share, more than fifteen years after the book’s publication.

The technological simplicity of renewable energy generation is clear. Unlike any other energy source, renewables benefit from one of the shortest generation to consumer value chains. While almost no consumer can harness small-scale fossil-based technology – to the point where they control the entire value chain – it is now feasible for a homeowner to place solar panels on their roof and completely bypass the national electricity grid.

The slow pace of renewables-driven disruption is therefore the result of poorly developed ancillary infrastructure. Unlike coal or natural gas, renewable energy technologies cannot be dispatched, and this limits one of the key jobs-to-be-done of any energy consumer (individual or business). If Super Bowl Sunday requires a surge in capacity, a coal or natural gas plant can simply increase the input to its generators. In contrast, the sun cannot be asked to shine more for a solar panel or the wind to blow more for a turbine.

When appropriate storage technologies are developed, renewables will surge. In weather-appropriate locales, solar fields have already been arrayed in a way that compensates for minor cloud cover. The relative ease of generating renewable energy opens the industry to a host of competitors and small-scale entrants, none of whom must contend with the over-leveraged and expensive infrastructure required to fire coal or gas.

In the next decade, natural gas will eat away at petroleum’s share of the transportation sector, and at coal’s share of the electricity generation sector. Yet these increases in market dominance will be but a Pyrrhic victory for the natural gas industry. Once renewable energy overcomes accessibility barriers, a holistic energy system can be developed, where appropriate storage technologies allow renewables to remain at the center of our energy ecosystem.

The uncertainty of the renewables time horizon does, however, represent a clear challenge to both disruptors and incumbents. Renewables challenge every component of the standard energy industry business model, turning upside down the key resources and value propositions of not just oil and gas companies, but also utilities.

Grid parity is only the latest signal that renewables are on a path towards gaining a significant slice of the pie. In the past decade, the fortunes of renewable energy developers have been undoubtedly mixed. But the rate of technological progress over a longer patch of history demonstrates that, as with many great innovations, the downward slope of the cost curve is ultimately what will bring change.