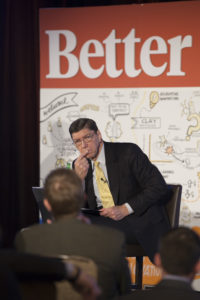 Boston has long been the cradle of innovation in healthcare, with its world-class research hospitals and the highest concentration of National Institutes of Health funding. Along with neighboring Cambridge, Boston serves as a hub for healthcare entrepreneurship. Some 46% of the region’s total venture capital investment last year poured into healthcare startups.

But the city on the Massachusetts Bay can also be seen as a microcosm for what’s broken in our healthcare system, in that almost all the historical breakthroughs and improvements, while much welcomed, have been along the dimension of sustaining healthcare innovation rather thandisrupting it to widen access by bringing down costs.

At the recent Better Health Boston event—part of a nation-wide series of forums being organized by McKesson Corp. in partnership with Innosight—healthcare leaders from across all sectors met to discuss what role they could play in transforming the industry over the next five years. Here’s what we heard about ways to spur disruptive innovation.

Academic Hospitals Provide Everything for Everyone

The day began with a session led by the originator of disruptive innovation theory, Harvard Business School Professor Clay Christensen. The co-founder of Innosight noted that many of the prestigious hospitals in Boston have multiple, incompatible business models all under one roof, each catering to a different “job to be done.” He likened hospitals to an axel manufacturing plant he once studied in Pontiac Michigan. The plant had significantly higher cost compared to its peers because it ran too many product lines. Every new line increased overhead costs and system complexity.

In many of hospitals, the lesson is the similar. Hospitals are built to do almost everything and much of their cost structure goes to overhead. “Without philanthropy and regulation,” said Clay, “these hospitals would just collapse.”

Christensen recommended that academic hospitals focus on one business model, “the solution shop,” in which the world’s leading doctors keep up their vital research and work to diagnose and treat patients with the most challenging cases, but allow other provider systems to deliver more routinized care.

Indeed, Christensen urged shifting just about everything away from central hospitals, so that the majority of healthcare work could be performed at lower-cost venues. These “focused factories” include community hospitals for acute care as well as primary care venues like the Cambridge-based startup Iora Health, retail clinics like those at CVS—all the way to care in the patient’s home using “facilitated networks” such as patientslikeme.com.

Even long standing hospital systems can challenge the status quo. Tufts Medical Center’s CEO Emeritus Ellen Zane was on hand to talk about how she led the launch of the Distributed Academic Medical Center, a way of sending the most sought-after doctors from academic centers to surrounding community hospitals to perform knee and hip surgery and many other common procedures at suburban-care prices. Under the model, community hospitals can use the Tufts brand and focus on secondary care—while only sending higher risk patients to Tufts.

While the Tufts model has a long way to go before it makes a significant cost impact, the program hit its benchmark numbers in its first year and has begun to slow the “leakage” of patients who would otherwise drive past their local hospital and head downtown.

Along the same lines, Iora Health is addressing a giant problem in primary care: doctors are commonly forced to deliver care in ten-minute windows. Time-crunching prompts doctors to order pricey diagnostic tests or send patients to expensive specialists out of fear that “I may have missed something,” said CEO Zander Packard. Iora’s collaborative care model involves assigning a dedicated “health coach” to patients. The coach not only visit homes but is always available by phone, text and e-mail.

Iora zeros in on the 15% of patients who account for 85% of costs, those with chronic conditions like diabetes or Alzheimers. Doing simple things, like moving chairs near light switches for the elderly, can prevent accidents that can result in giant hospital bills.

So far, Iora serves just 8,000 patients, but Packard set off lots of lightbulbs among participants with his vision of “engaging patients in their own care by reinventing the primary care experience.”

One of the most difficult business models to execute involves the shift from fee-for-service to bundled payments. Lisa Whittemore, vice president of network performance improvement at Blue Cross Blue Shield of Massachusetts, shared how the insurance giant has connected the financial incentives of physicians to performance and their ability to coordinate care with other practitioners. These bundled arrangements are governed by an Alternative Quality Contract.Instead of getting paid for visits and procedures, doctors get paid for improving health outcomes or lowering costs.

Whittemore’s project also shows the challenges of creating institutional change. So far, the Alternative Quality Contract has only covered 700,000 patients since 2009, and the healthcare costs per patient have not come down (although the rate of increase has slowed). Whittemore said it’s moving in the right direction, but there’s a lot of work to do to make this the predominant model. Whittemore came back to a theme that we heard repeatedly at an earlier event in Portland, Oregon:the huge amount of institutional inertia within payors and large provider systems.

Another theme from Boston, as it was in Portland, was bridging start-ups and established healthcare businesses. In pockets we’re seeing good collaboration but it’s far from widespread. Both the start-ups and the incumbents want it, but they haven’t figured out a way to make it happen.

But at the end of the day, many of these new models come down to human variables such as trust, said McKesson CEO John Hammergren. He advocated not only for collaboration among doctors and other healthcare professionals but between large corporate entities, provider systems and startups, the Davids and Goliaths of the healthcare world. “After all, every time we talk about cutting waste,” said Hammergren, “it’s someone else’s profit. It’s going to take both the Davids and the Goliaths. How do we trust each other to build collaborative care?”

Next, we’re in the Twin Cities. Let’s see how this question plays out among leaders there.

Chatham Sullivan is a partner with Innosight and Better Health Tour key-note speaker. Evan Schwartz is the director of storytelling at Innosight.