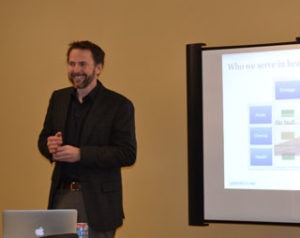 What would happen if people struck by multiple sclerosis, diabetes, Parkinson’s, lupus, and dozens of forms of cancer were given the tools to report the daily details of their moods and treatments to other patients like them? (Hint: it’s already going on among 150,000 volunteers).

At a recent Friday Forum lunch, Innosight was treated to a glimpse at a possible future of one of the world’s biggest industries. This came in the form of a guided tour of what is happening online as well as behind the scenes at PatientsLikeMe.com, the breakthrough social networking and data-sharing site for people with chronic diseases.

“We’ve got to give patients the ability to change the system,” says Jamie Heywood, the chairman and co-founder of the Cambridge, MA startup. “Participation is what matters.”

Heywood began by touching on the well-chronicled story that led to the founding of his company. In 1998, his brother Stephen was diagnosed with ALS (aka Lou Gehrig’s disease) at the age of 29. Along with third brother Ben and a small team, Jamie launch a laboratory to find a cure for a disease that gradually paralyzes every bodily function except the mind.

The Heywoods didn’t find a cure. Stephen passed away in 2006, a story that was told in an acclaimed documentary and book. But they discovered something else: a completely new business model for disrupting the business of chronic care, which accounts for more than 60 percent of healthcare costs in the U.S. alone.

Currently serving the unmet needs of patients with more than 1,000 conditions, PatientsLikeMe.com is tackling at least four crippling problems that many others across the industry don’t even recognize as such.

Problem #1: People with chronic diseases have no good way to way of talking with patients like them.

The basic idea began as a “Reese’s Peanut Butter Cup moment,” says Heywood, where the chocolate was chronic disease and the peanut butter was online dating. “It’s an online dating site for patients except you’re allowed to be polyamorous and no one minds.”

He demonstrated with a multiple sclerosis example. If you have had the disease for five years, you can search for people who have had it in the same range of time and also use the same treatments. Then you can join a little online support group and check in with those people daily.

This provides enormous social, emotional and medical benefits that patients cannot get otherwise. The premise is that when you are given only a certain number of months or years to live, you don’t want to waste time waiting for information on what works, what doesn’t and why. About 10 percent of patients report switching doctors or specialists because of the service.

Problem #2: A lack of focus on improving quality of life for patients.

What amazed Jamie about his brother Stephen was that he continued to live his life after his diagnosis. Even as the ALS was taking hold, he got married and fathered a child. And even as his condition deteriorated, he remained essentially happy.

On PatientsLikeMe.com, people report their mood (from very good to very bad), as well as their quality of life (broken down into social, mental and physical condition.) Given that we know how psychological effects can actually improve one’s well-being, it’s astonishing to Heywood that no one has done this at scale before.

“How can you correlate how social interaction helps patients?” he asks. “What is the social ‘dose’ and response curve?” But Heywood doesn’t just pose these questions hypothetically. A number of published studies have resulted from data from his site.

Problem #3: The alarming lack of data on patient outcomes.

Why is it normal for pharma companies to pay doctors $10,000 per year for information on how their patients are responding to treatments? Heywood wondered why isn’t that data available all the time, for free, in a much richer way.

Filling this need, PatientsLikeMe essentially turns individual stories into data that never before existed in the healthcare system. And it does so in a way that’s potentially disruptive to the industry.

In some cases, PatientsLikeMe can tell you the results of a $25 million study or clinical trial before the money is spent and the trial is performed. That’s because groups of patients are already on the medication and they are self-reporting the data—in much greater detail and in much greater numbers than in typical clinical trials. In addition, there are control groups of patients who are not using the medication.

Heywood notes that pharma companies will often spend $1,000 per rodent to monitor a drug’s effects in a trial. But when actual humans are using the drug, no one bothers to even check what happens.

The eHealth movement, which PatientsLikeMe is helping to lead, is all about overturning this and driving down costs. This will lead to what Heywood calls a new “measuring outcomes” market that will be revolutionized by new kinds of diagnostic technology that feeds more data onto his website.

The end game is to “show evidence that predictive diagnostics work,” he says, and in some cases “that will bypass multi-billion dollars in treatments.”

Problem #4: There’s no good way to answer the big question all patients have.

PatientsLikeMe is guided by a single question that is on the minds of all its members: “Given my status, what is the best outcome I can hope to achieve, and how do I get there?”

Heywood contends that the healthcare system currently fails on all three components: Patients are not given adequate information about their current status. They are kept in the dark about cutting-edge research on new treatments. And therefore, their regimen isn’t continually adapted to achieve that outcome.

Since new information is being generated at all times, and since research is moving so fast, the answer to this question is changing at the pace of the Internet, which is why PatientsLikeMe members tend to log in daily—if not continually—to see what’s new in their community.

Ultimately, PatientsLikeMe is about is turning healthcare around to face the patient.

“The more I learn about healthcare,” he says, “the more I ask: who is paying?” In his view, too many systems in medicine are driven by the question: How do I put my kids through college? In too many cases, expensive tests, treatments, trials, and hospitalizations are prescribed because they make money for actors in the system.

He admits this may sound cynical, but that’s his explanation of why most of the industry is ignoring the rich data on his site. PatientsLikeMe is a for-profit company that is looking to form partnerships with all kinds of companies, especially pharma companies that are looking to explore new ways of measuring and improving outcomes. A main reason he spoke at Innosight was to see if we could help enable those new connections.