Today there are regular reports about the great things that will come from nanotechnology, energy harvesting, and bioscience. Five years ago, seemingly everyone talked about the promise of home networking, the potential of handheld devices, and the future of digital imaging. While some of these technologies have not lived up to expectations, even those that succeeded did so in surprising ways.

For companies, clearly the challenge of assessing the potential impact of a new technological development is a common one—and a difficult one. New technologies appear in the headlines every year and the popular press frequently calls attention to entire disciplines in science or engineering, referring to them as “emerging” or “disruptive” technologies. While these developments make for good reading, the question that comes to the mind of the business manager is “How will this affect my business?”

This article spells out a four-step methodology to help answer this question, then applies the methodology to a hot set of emerging technologies called wireless sensor networks. By following this approach to technology assessment, business leaders can more reliably identify potentially disruptive technological developments and differentiate threats from opportunities.The four steps are:

It is important to go beyond the current or expected market applications to understand what the technology actually does—or could do. For example, a laser may be used to perform surgery on an eye, but what it is actually doing is ablating material in a precise fashion. To think about new possibilities, ask these types of questions: How can this technology facilitate an existing process? Does it improve an outcome? Does it enable a completely new activity?Try describing the technology using verbs: heats, bends, mixes, transmits, or eliminates. Then begin to qualify them with the appropriate adverbs (quickly, precisely) or caveats that further define the technology’s capabilities. Finally, assess all of the situations in which the technology could be used, including who would use it, how frequently they would use it, for what duration, and at what scale.

As an example of how to do this analysis, consider wireless networking technologies, such as those offered by California-based Linksys, which first arrived on the market in the early 2000s. The technology allowed users in their homes or offices to send data wirelessly at high speeds over short distances. The signals degraded rapidly beyond about 300 feet and initial versions of the technology provided low levels of security and encryption.
Some of these attributes are negative, but be careful not to simply dismiss a technology with limitations: Limitations in one context might be perceived as benefits by a different set of users considering a different application. The next step helps to spot these users.

Step 2: Identify ‘Employers:’ Those Who Need To Do a Job

Now, begin to identify customers who might be interested in “hiring” the technology. Using the descriptive verbs identified above, ask “Who needs to heat, bend, mix, or transmit …” Pay careful attention to those who will both embrace the technology’s benefits and tolerate the technology’s limitations.

Limitations in one context may be benefits to users in a different context.

For some, the job satisfied by the technology may only be an extension of currently sought performance dimensions. For others, the technology may be truly disruptive, enabling a new capability or facilitating the performance of an old capability in a new circumstance or with greater convenience. If it is truly a disruptive technology that trades off pure performance for other benefits, look for users who would be delighted by “good enough” solutions. For example, many consumers snatched up wireless networking solutions because the technology made it easier to install and utilize in home networks. The security- and distance- related limitations were irrelevant in that context.

Think beyond narrow industry definitions to identify other potential users that might value the technology’s benefits. As an illustration, consider the processes and technological know-how involved in creating chemical suspensions, suspending one material within another. Rheological formulation and mixing allow the suspension of moisturizing pellets in cosmetics and metallic particles in paint. Who has to solve a similar problem? Food and beverage companies. Although the market seems radically different, those companies have to solve similar problems, ensuring that fruit remains suspended in premixed yogurt, chocolate chips are thoroughly distributed in ice cream, and flavor pellets remain suspended in novelty beverages.

An expansive look at potential “employers” of the technology can help identify market segments that serve as the perfect “foothold” for a new technology.

In this step, remember that sustaining and disruptive innovation is often a matter of perspective. Other players in the value chain of one industry—or in adjacent or completely different industries— may feel secondary effects of a technology that are just as disruptive as those felt by businesses directly applying the technology.

With this in mind, consider the impact that the technology could have on suppliers of key inputs to the technology or on vendors who ultimately offer the technology to end users. Just as a rising tide floats all boats, the advent of a disruptive technology can change the future of players both upstream and downstream.

Wireless networking’s success reverberated through the value chain, for example. Linksys created a successful business selling wireless routers and other equipment. Its success helped makers of key components, such as chip providers, grow quickly. Intel seized on the technology, embedding its popular Centrino chip in computers. Retailers such as Best Buy created departments for home networking. Networking giant Cisco Systems ultimately purchased Linksys in 2003 to add a consumer and small office piece to its networking empire.

Those who believe that they will be affected by a technology should ask several key questions to formulate their on-going strategy:

In the innovation community “wireless sensor networks” are hot. These networks have numerous applications and could allow companies such as Honeywell or Siemens to simplify environmental and process control systems, organizations such as Johnson & Johnson and Medtronic to enhance the capabilities and convenience of health monitoring devices, or even enterprises such as Tyco’s ADT to reduce the cost and complexity of security systems.

Producers of wireless sensor network hardware, such as Millennial Net, Dust, Crossbow, and Intel, view this technology as a tremendous growth opportunity. Many companies in the potentially affected end-user markets also see the technology as a growth vehicle. Others, however, sense a threat that could force them to revamp their offerings and potentially cannibalize existing product sales. Worse yet, some companies don’t even know that they could be affected by this technological development. The methodology outlined above can help bring clarity to the potential impact of wireless sensor networks.

The applications of this integrated technological solution are thus highly variable and the potential configurations infinite. However, we can gain insight into the truly innovative aspects of the technology, and its disruptive potential, by closely examining the technology’s strengths and weaknesses.

With wireless sensor networks, communication bandwidth and transmission distances are typically quite limited relative to wired systems due to the constraints of current power storage technology. In addition, issues of privacy and the challenge of interpreting simultaneous signals from multiple sensors in a network are all perceived by some as drawbacks that have limited the adoption of wireless sensor networks.

However, this technology enables many unique, and potentially valuable, applications. Here are just a few: sensing on moving objects, at a stand-off distance, and through objects; monitoring multiple objects simultaneously; enabling network redundancy without wire installation costs; allowing simple sensors to conveniently and cost effectively observe complex events; facilitating the use of low quality, low-cost sensors by allowing network communication and redundancy to compensate for individual sensor failure.

Wired sensor networks may be an impractical, inconvenient, or too costly way to achieve these tasks. Users interested in getting these jobs done with wireless sensors could fuel disruptive growth.

Step 2: Identify ‘Employers:’ Those Who Need To Do a Job

To assess the disruptive potential of the technology, we must identify those capabilities that are new and unique to the innovation or enable a job to be performed in new circumstances. In the case of wireless sensor networks we might ask “Where would some data be better than none?” Or, “Where would limited data from a few wireless sensors be good enough?”

Of course, the disruptive potential of wireless sensor networks is likely to vary by industry sector and, in fact, by target application within each sector. (Figure 1 below gives example uses across a range of sectors.)

For example, in the logistics industry the tagging and identification of goods using wireless sensors such as RFID tags could be perceived as a sustaining extension of the capability offered by Universal Product Code (UPC) systems (bar codes used for product identification), which are already broadly adopted in the industry.

The benefits of wireless tags, which could perhaps be scanned in mass, less directly and from a distance simply enhance the already sought performance of logistics players such as UPS and Federal Express.

On the other hand, wireless monitoring of a patient’s heart rate wherever they move in their home with data linkage to a medical facility provides a more convenient and thorough source of information that satisfies a job previously addressed by inconvenient and infrequent visits to an office or clinic. In this context, even low quality data transmitted to practitioners could be a substantial improvement over past options. To the manufacturer of wireless sensor systems, the logistics market looks like a sustaining innovation, whereas the health monitoring market might display the above-average gains associated with disruptive innovations. 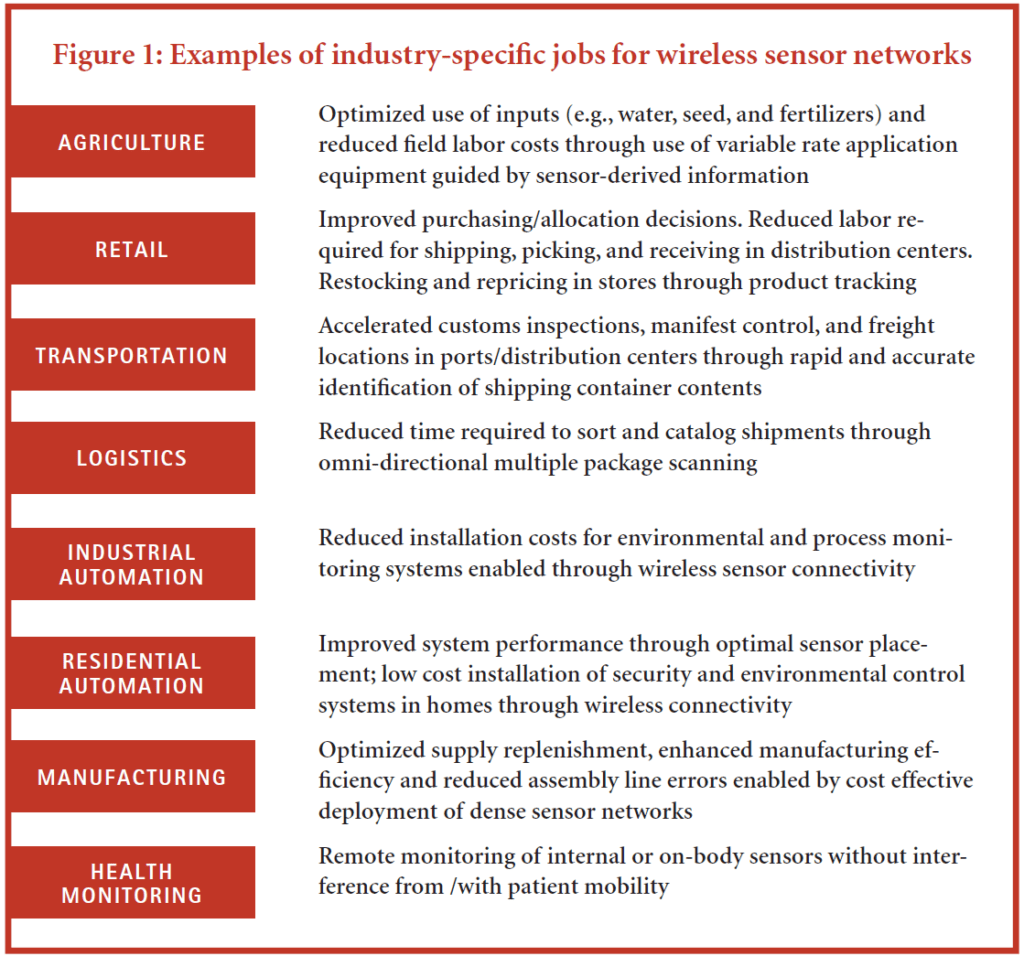 While the wireless sensor system manufacturer views the logistics market as a strong but sustaining play, a company manufacturing UPC code readers may find RFID disruptive in the logistics arena. While RFID may not fully compete with UPC functionality today—in some circumstances it is less efficient and more expensive—one could envision investment driven by success in other areas enhancing the capability of RFID to a point where it surpasses UPC code performance on pertinent dimensions.

A company in this value chain should ask whether in five years it would rather focus on selling hardware components to makers of UPC code readers or on providing the core components for wireless sensor networks systems.

The implications of this analysis depend on who you are. Investors might want to invest in RFID hardware. UPC code manufacturers ought to think about how they can develop defensible market niches and diversify out of business segments that may decline. Logistics providers might want to start running experiments with suppliers to begin utilizing the technology. Regardless of your perspective, following a structured analysis can help bring the seemingly murky world of technology into focus.

Joe Sinfield is a Senior Partner at Innosight and is also a tenured Associate Professor of Civil Engineering at Purdue University.