manufacturing companies. While 95% of industry executives in a recent Economist Intelligence Unit survey said they expect to be using IoT solutions within three years, 56% admit that they are not yet taking action.

No one doubts the potential reach of the technology: By 2020, 5.4 billion objects and pieces of equipment will be making business-to-business connections on the Internet, says ABI Research, with annual growth averaging 28%. But making those connections is just the start. What companies learn once their equipment is connected is that it opens up a portal to a new way of doing business for which they might be wholly unprepared. 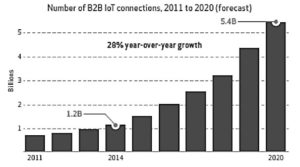 Indeed, companies born during previous industrial revolutions are finding themselves at a crossroads: either adopt a wait-and-see approach and risk losing ownership of customer relationships, or embrace the strategic uncertainty and drive the change.

Thinking Outside the Machine

We believe that the only way to break the logjam is to shift your perspective in specific ways as you develop your go-to-market strategy. All of these shifts in perspective have one overriding thing in common: they are less about the technology and more about the unexpected implications arising from software, data analytics, and marketing.

Caterpillar (IW 500/23) found that out within just a few months of launching its Cat Connect capability in 2014. Suddenly, its gear in the field was generating “a quintillion bytes of incoming data.” The possibilities seemed endless: usage time and fuel efficiency could be maximized, idle time could be minimized; on-board cameras could detect obstacles that could cause mishaps and accidents.

All this data presented the potential to sell on the basis of improving productivity, profits, safety and environmental efficiency for those who run construction and mining operations. The benefits it could promise to the customer were clear. As a result, CEO Douglas Oberhelman declared at its annual shareholders meeting that the company must think “beyond the yellow iron.”

Yet the data deluge was so overwhelming that Caterpillar experienced unexpected barriers that leaders across many different industries must also overcome. As a manufacturing-based company, Caterpillar simply didn’t have the internal talent in software, data analytics, and business model innovation to scale its new ambitions in an effective way.

Learning from the early challenges faced by Caterpillar, Siemens, Bosch, Kennametal and other industrial companies, we have devised a model for thinking through how companies can approach the market by adopting five new perspectives for spotting, delivering and capturing value.

This shift happened rather abruptly at Caterpillar, where for 90 years innovation was all about improving its iconic yellow construction equipment in new ways. Now, innovation centers on what to do with all the information coming off of those machines.

To make up for these deficiencies, Caterpillar launched a new Analytics & Innovation division charged with developing new digital business models. Caterpillar also formed a joint venture with Chicago-based predictive analytics company Uptake to enable customers to know ahead of time when its equipment would need service—shifting to a “repair before failure” model instead of the traditional “repair after failure.”

That created a new challenge, however, not only due to the sheer volume of data, but because there are many different forms of data. On one level, Caterpillar needs to unify physical machine data, such as repair logs, with Internet-based data, such as weather along with reports coming from the human operators of the equipment. As a result, a data-driven insight involving a small repair or added lubrication could avoid larger equipment breakdowns.

But in other cases, continuous performance data could prompt Caterpillar analysts to conclude that a job site doesn’t have the right mix of equipment to get the work done most effectively. That could lead a contractor to deploy different equipment and enhance productivity, and thus profitability.

As a result, the emerging needs of customers are requiring industrial companies to look towards integrating data on many levels. This new way to spot value produces knowledge and insights based on key tasks that customers are trying to get done, which leads to our second shift.

Read the full article at IndustryWeek