The devastation wrought by the hurricanes that have hit Texas, Florida, Puerto Rico and the islands have only brought into sharper focus the need for a long-term plan for America’s ailing infrastructure. With widespread flooding, power outages, and building damage, the rising price tag for recovery now comes on top of a long-delayed overhaul of the nation’s roads, bridges, tunnels, as well as our water systems and electrical grid.

Anything that comes with a multi-trillion-dollar price tag should rightfully receive financial scrutiny. However, we also need to remember the importance of carefully considering what we’d be funding in the first place.

The goal of such a colossal endeavor shouldn’t be to make America’s infrastructure “good enough for now”—it should be to propel the country ahead and prepare it for the 21st century’s infrastructure requirements. Rebuilding a system that will need to be replaced in another 20 years is not sustainable.  Future systems must be poised to deliver innovative infrastructure solutions, framed in a resilient way to respond to unexpected or sudden new changes.

This goal requires a strategic approach, what we call a “future-back” framework: a method of building both a strategy and internal capabilities to move towards that future world today.

The foundation of future-back is not to lapse into a “present-forward” mindset, repairing what we have today. Rather, it entails picking a point in the future, say 2040, and imagining an ideal infrastructure and then working backward to figure out how to make it happen.

Confronting our current grade of D+

That brings us to where we are now. As President Trump seeks to fulfill a campaign promise and sign a plan to address our country’s infrastructure needs, politicians, journalists, and pundits are debating where to find the money to fund the plan. And it would be a considerable amount of money – anywhere from the $1 trillion Trump has mentioned to the $3.6 trillion that the Army Corps of Engineers estimated would be required, after giving the country’s infrastructure an overall D+ grade in its 2017 infrastructure report card, for the second time in a row.

That’s particularly unnerving when you realize that the infrastructure report includes such things as drinking water, bridges, the energy grid, and roads – a total 16 vital categories that touch our daily lives and ensure our quality of life.

A future-back framework incorporates a five-step process that takes institutions and through multi-week planning sessions in which a leadership team debates what the future needs are, imagines future scenarios, and finally aligns on a portfolio of ventures that can begin in the here and now. 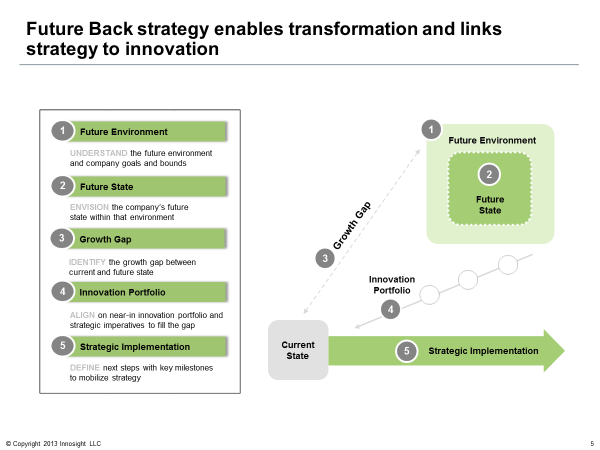 Strategic change for the next generation of American infrastructure requires understanding the forces that will impact the country’s infrastructure systems.  Just as the most successful companies predict where customer needs are heading and then anchor around that, so must our government consider what infrastructure needs will be in the future state and build towards that, rather than automatically replacing old asphalt roads with new asphalt roads.

This step is the most important and most difficult in the entire process.  Too often, present-day assumptions impede on thinking about a world 20 to 30 years in the future. Planners must truly separate from today’s assumptions and think about what is possible.

This is difficult, but not impossible. For the future of water, for example, a quick list of relevant trends might include: changes in population distribution and water requirements, energy innovations that impact water use, smart grid technologies, and even social trends towards bottled water or recycled wastewater.  The future can seem entirely murky and unknowable, but with the right group of subject matter experts in the room, it can be surprisingly possible to agree to a perspective on the future.

With the future environment assessed, the next step is to develop the requisite “future state” of the country’s roads, bridges, energy grids, and other infrastructure systems. How will the new infrastructure system account for future innovations in autonomous vehicles?  What new layouts or capabilities need to be built to respond to renewable energy sources or the impacts of climate change? What new roles will infrastructure need to play with the proliferation of an Internet of Things-enabled world?

A comprehensive infrastructure ‘future state’ would need to consider all the implications of the environment mapped out in step 1.  In corporations, it is common that new customers need to be targeted. For a vast case like infrastructure, it’s more likely that shifts will come in the role that infrastructure is expected to play in people’s lives, and how it satisfies those roles.  Scenario planning is often helpful here to assess trends and build the future state.

For example, climate change will have a major impact on our infrastructure. Some of these impacts will be anticipated and are already happening—rising ocean levels are threatening low coastal areas in Florida and Maryland, and storm surges like Hurricane Sandy will wash out transportation and energy infrastructure. Others, however, are less predictable, such as the impact from the rise of water-borne diseases in the Great Lakes, or of Arctic thawing in Alaska.

Step 3: Bridging the gap between now and the future state

Once a future state has been outlined, it is possible to line it up with today’s situation and see where the work lies.  In corporations, this is called a ‘growth gap’ and is measured typically by revenue or profit.  For the government, a more nuanced “infrastructure gap” could be calculated, that counts both tangible infrastructure (miles of roads number of dams), and capabilities, such as technology-enablement or climate resiliency.

A strategy can then be set against that infrastructure gap.  And because no strategy will perfectly predict the future, you must also build resiliency into the organization for the inevitable times when the strategy is wrong.  This is particularly challenging in a capital-intensive context like infrastructure, but a ‘test and learn’ approach could still be applied here, wherein inexpensive, minimum viable experiments allow you to learn quickly and cheaply.

A portfolio of projects of all sizes needs to be envisioned and agreed upon before embarking on implementation. Such projects should range from major efforts such as reengineering our electricity grid to be more resilient and to accommodate an influx of renewable energy from solar, wind and other growing sources.

But it should also include small pilot projects that point to new possibilities for the future. For example, a Milwaukee startup called Wellntel is building sonar-powered systems to track groundwater levels, and they are doing it relatively cheaply, at under $1000 a system.  Municipalities could test out a system like this with low investment to learn what works for them before devoting millions of dollars to expansive groundwater and aquifer management solutions.

A future-back approach requires changes in how a strategy is designed and executed.  A major risk would be the tendency to have process stifle innovation.  The government’s first step, once a plan is funded, will likely be months of contract bids and confirmations.  Though necessary, it will be massively important to not allow all progress to stall here. The ‘machine’ would take over, and any innovative visions would erode until the new solution looks essentially the same as ‘business as usual.’

To counter this, teams must be set up immediately to take steps in realizing that future vision. Here, it is important to remember that innovative solutions, which by nature are about doing things differently, require doing things differently. Teams working on innovative solutions must be set up separately from the core operating team, with separate resources and metrics.

The second major risk is to overcommit to one course of action for the future.  Building resiliency in the system is of tantamount importance. No one can know the future, and even the best future vision of the world will be wrong in some ways. Rather than hope for perfection, an organization must prepare for the inevitable changes, whether expected or not.

Any perspective of the future will be wrong in some way. Our infrastructure must be ready to respond, or the trillion-dollar system will fall into obsolesce even faster than its predecessor.

The need to address America’s infrastructure is one of the few issues on which both parties and the American public agree. Just as the legislators and media are focused on conceiving of and debating funding plans, we must also devote that same amount of energy to the plan itself. We cannot assume that the correct vision for a truly innovative, unfractured system will just appear. We have to create it.

Read this executive briefing to learn how a future back strategy can allow you to create the future instead of being disrupted by it. 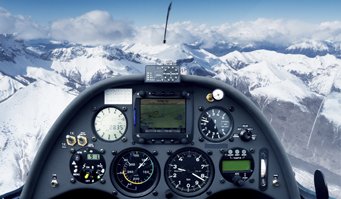