Best known for its marketing might, P&G’s legacy as an innovator is equally rich. Over its 175-year history, the Cincinnati firm has consistently created new categories of consumer goods—from the first disposable diaper (Pampers) to the first fluoride toothpaste (Crest) to the first synthetic laundry detergent (Tide).

But in March of 2000, a dip in sales and an earnings warning sent its stock tumbling. By June, the board named a new CEO, A.G. Lafley, who brought in fresh thinking about corporate strategy. When an internal analysis revealed that only 15% of innovation projects were meeting success targets, senior executives began searching for ways to turn around this key metric. During this time, a number of top P&G leaders were exploring ideas in The Innovator’s Dilemma by Innosight co-founder Clay Christensen. Soon after, P&G began collaborating with an Innosight team to build innovation capabilities that would spawn new business models. The idea was to institute a process that was analogous to a factory—making innovation systematic, repeatable and reliable.

Via its Connect & Develop program, P&G stepped up the sourcing of raw materials—in the form of product ideas. “It didn’t matter where the ideas came from,” says Nathan Estruth, vice president of P&G FutureWorks. “We had to systematize a process to find them, to partner, to bring them in, and to turn raw ideas into innovations in our growth factory.” A key part of improving its innovation success rate was setting up “innovation assembly lines” by seeking growth from four major categories of innovation: 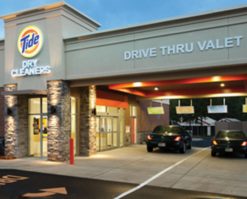 onducted a market trial for the concept of attaching the Tide brand to a new consumer experience. Deploying Innosight’s “jobs to be done” approach, P&G found that there was dissatisfaction with existing dry cleaners and potential room for a national brand.  Tide Dry Cleaners was initially launched in just two or three locations. That allowed P&G to refine the new business model and operating plan before it began to scale to more locations. (It’s now in about 40 U.S. cities).

P&G’s growth factory initiative was detailed in an article in the Harvard Business Review by Scott Anthony and Bruce Brown. All in all, thousands of P&Gers applied its improved innovation framework to scores of new projects and products. “Innosight has been a close partner in P&G’s innovation transformation,” said A.G. Lafley, who retired in 2010 but returned as CEO in May 2013 for two more years.

The result is that P&G has dramatically improved its innovation success rate, moving from about 15% to nearly 50%, meaning about half of its new product efforts are meeting benchmarks for success. That helped boost overall corporate performance. Over the decade, P&G’s revenue more than doubled, and profits quintupled.

The commitment to the growth factory principles has continued. “There is a confidence inside P&G,” says Estruth, “that the systematic approach enabled by Innosight will continue to drive our growth factory and help us meet our goals for many years to come.”

“Innosight has been a close partner in P&G’s innovation transformation.”