A STRATEGY FOR NEW GROWTH

The electric car itself is not a new idea. But there have always been problems with the state of batteries—they’ve been too bulky and expensive and only offered a limited driving range. The Volt team turned the problem on its head by embracing the range limitation, conceiving a car with compact battery system and an “extended range” gasoline engine as a backup. After previewing a concept car at an auto show in 2007, the team embarked on the hard work of building it.

But going to market with a category-creating product presents unique challenges. Breakthrough products can often generate early excitement but can struggle to find traction in the market because of the “unknown” factor, which can leave interested buyers on the fence. For Chevy, it was critical that it have a deep understanding of the needs of its target consumers: the early considerers who could also become passionate brand ambassadors.

WHAT DRIVES THE DRIVERS?

To ensure a successful roll out, Chevrolet understood that it needed to think beyond traditional research and segmentation of customers. Innosight launched a “jobs-to-be-done” project to more fully understand customer desires. The “jobs” analysis examined the full spectrum of motivations that drive a purchase—social, functional, and emotional. Building on the resulting insights, Chevrolet identified the need to inform the broader public about the Volt’s unique environmental and performance benefits. That led to differentiated and persuasive positioning language to speak directly to the jobs Volt’s target customers would find most compelling.

As Chevrolet was planning the initial launch of the Volt, the economy erupted in crisis. Gas prices spiked and the 2009 recession hit GM harder than most, resulting in a painful

restructuring and bankruptcy. Sticking by its vision that the Volt team needed to serve as the model of a “new GM,” the team realized that it needed to deliver all that was promised and more.

The launch of the Volt was met with wide acclaim and many industry accolades—including Motor Trend’s 2011 Car of the Year and the 2012 European Car of the Year. The Volt also took the top honor in the 2012 Consumer Reports Owner-Satisfaction Survey, beating all 240 other car models when owners were asked the question: “Would you get this car if you had to do it all over again?” In response, 92% of Volt owners said “Definitely Yes.”

Initial data indicated that the Volt had the potential to transform GM and the 100-year-old Chevrolet brand. Some 33 percent of early buyers had never been in a Chevy dealership in their lives, and 86 percent switched to Chevy from a different, non-GM brand. Strong sales in its early years made the Volt the world’s #1 bestselling plug-in—a title it still held in 2016 when it became the first electric vehicle to surpass 100,000 cars sold.

“The outside perspective that the Innosight team provided us really opened up our eyes to the possibilities of how you do an innovative product.” 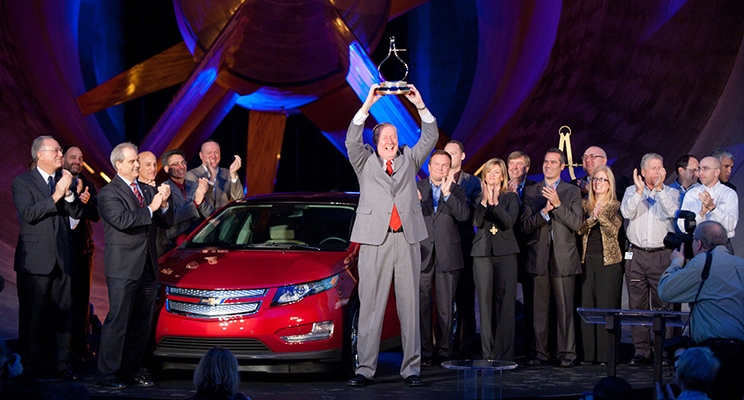